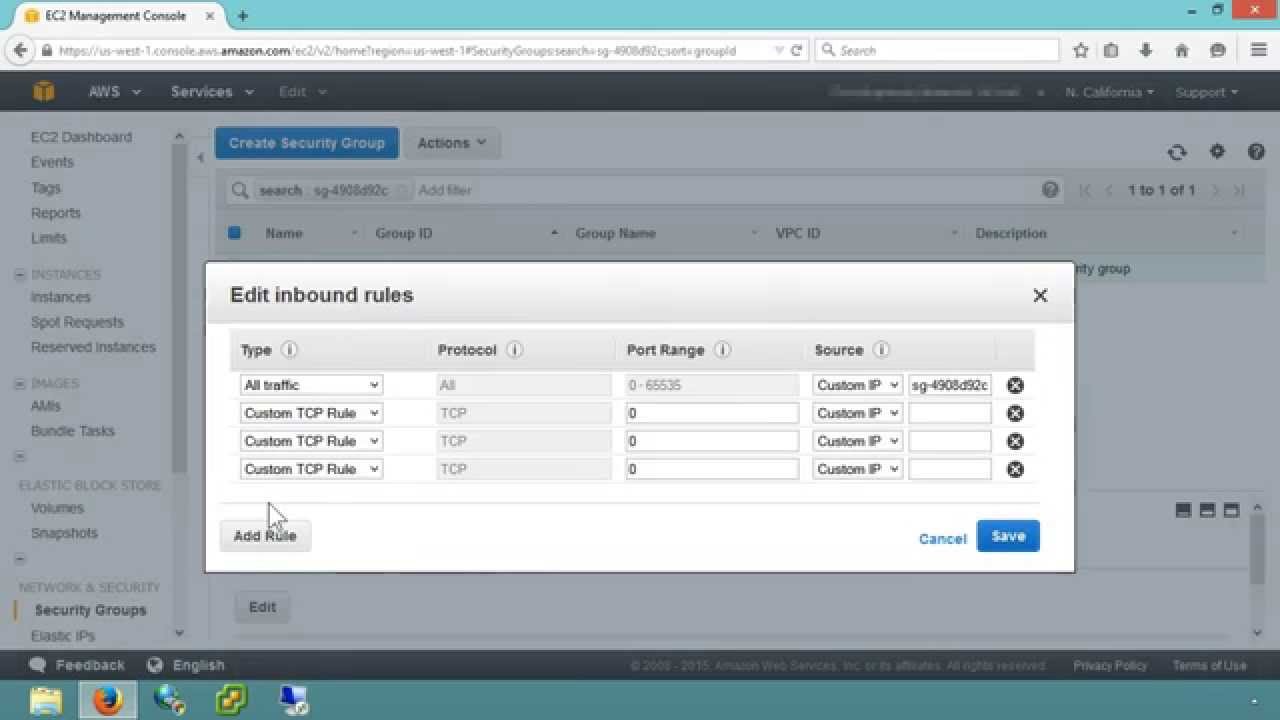 Security groups are like firewall rules for the AWS cloud. For help with configuring your security groups, please consult the AWS guide found at http://docs.aws.amazon.com/AmazonVPC/latest/GettingStartedGuide/SecurityGroup.html.

All rules are inbound; “Outbound” should be open globally to all traffic (default in AWS).

The following table lists the ports and protocols that you might need to open on your WANrockIT Node’s security group, and a description of what each is used for.

The last column in the “Add  Rule” dialog is the “Source”. This decides the range of IPs, or security group, from which the “Port Range” for each rule is accessible. This is done in CIDR notation, in the form “x.x.x.x/xx”, or by security group ID, in the form “sg-xxxxxxxx”. Multiple sources can be specified for a rule using comma separation.

The source can be left as “Anywhere”, although it is highly recommended to set the source to a limited IP address range or specific security group.

The following ports are used by your AWS WANrockIT Node to communicate with iSCSI/FTP hosts and targets within the same local network.

If your Node has been added to the security group used by your hosts and targets, they should already be able to communicate, and no further rules need to be added. If not, some of the following rules should be added to the Node’s security group, depending on the protocols you are using.

Depending your client/server setup, FTP may use a wide range of ports. If you don’t know what these are, it’s best to allow all TCP ports.

The port numbers for iSCSI will be different if using custom ports on your Node/host.

These ports will also have to be added to firewall rules on your hosts. For example if using an FTP server on a Windows 2012 server instance, the firewall rule allowing TCP port 21, plus the range used for data transfer, will have to be added to the list of custom “Inbound Rules”. For a detailed article on how to set up firewall rules on a Windows server please see the following Microsoft support article:
https://technet.microsoft.com/en-us/library/cc753558.aspx

The following screenshot shows an example security group for a Node which is connected to iSCSI targets belonging to the security group “sg-82fe2735″. The WAN link is established using public IP addresses, and IPsec is enabled. The Node is being administered from the same network as the on-prem Node is located (80.106.67.84).

Bridgeworks have looked at the problem of data movement and come at it from an entirely new perspective. In mastering the rules of data movement over distance, Bridgeworks have now broken them to provide you with the ability to move significant volumes of business critical data in real time removing unacceptable time lags, that risk failure, delay or presents major costs to your business.